The whole reason for choosing to shoot in April is primarily because we thought that it rains the least. Of course, 2 other practical reasons are that:

1. We'll give ourselves ample time to prepare for production - roughly half a year.

2. April is also Qing Ming time (a Chinese tradition of paying respects to our ancestors, & commonly about visiting graveyards & columbariums), so we wouldn't have to reject potential wedding customers who need are wedding videography services. Nobody should seriously hold their weddings in April. It's considered extremely bad luck.

Another month that is definitely bad for weddings is August, which the Lunar 7th month usually falls on. Tradition states that it is the month of the hungry ghosts, where the Gates of Hell are flung wide open for ghosts to freely roam our world.

So we don't usually have wedding projects in August. And also, for the past 3 years, August is WEVA Expo time, something that we look forward to as well. (I think we're pretty down-to-earth about where our daily income is going to come from, even after making this movie. Afterall, we're still struggling filmmakers...)

So we merrily went about setting April as THE month.

Damn, how I wished that I've checked with NEA first.

According to their website, April & December are the wettest month in Singapore.

In late March, it was pouring cats & dogs every afternoon. I was crossing my fingers that the weather will let up come April.

On our 1st day of shoot, the weather was superb in the morning. Our commencement-cum-prayer ceremony went great.

And then the sky turns dark real quickly. By 3pm, there's thunder (bad for sound recording) & lightning. And the rain came. Heavy downpour, to be exact.

Since then, it has been a constant guessing game with the weather. The first week was rather predictable, raining in the afternoon around 3pm. But it has been rather cunning since the 2nd week - sometimes the whole day, sometimes not at all, sometimes early in the morning, blah, blah, blah.

I have been the Weatherwoman on set. I monitor NEA's website religiously. Not that I can change the bad weather. At least we could plan as much ahead as possible and manoeuvre around it. 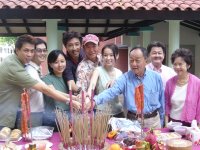 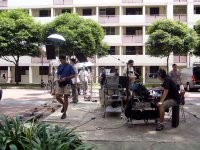 Filming in Progress
The weather was splendid when we shot the first two scenes.

After lunch, the sky grew dark & the rain came around 2 pm. 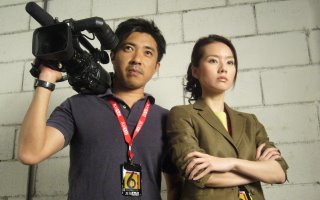 “Exposed!” is a 90-minute drama about a TV reporter, Renee Donovan, who has to return to an old neighbourhood she ran away from 10 years ago to cover an assignment.

There, an old neighbour, Old Teo, recognizes her. At every turn, he threatens to reveal her secrets. As Renee struggles to cover her real identity to complete the assignment, she is forced to confront her past and the shameful secrets which surface as a result.

The story is conceived by both Teo Eng Tiong and Lim Jen Nee. Lim wrote the screenplay and is the producer. The film will be directed by Teo.

Both Lim and Teo are graduates of Ngee Ann Polytechnic’s School of Film and Media Studies programme. Indeed most of the crew are graduates from either the Film, Sound and Video Diploma or the Advanced Diploma in Film Production programmes. Says Lim, 29, “I think this is probably the biggest team of Ngee Ann Polytechnic film graduates working together on a movie production. 99% of us graduated there. That’s great because it means we all share the same vision and passion, and will give the Singapore audience a breath of fresh air in film narrative storytelling.

Everyone comes out of film school hoping to make feature films,” says Lim, “for us, this is finally coming true.”

“Exposed!” will be shot over 20 days in April on High Definition video.

The film features a strong cast of popular and veteran actors such as Mediacorp artiste Yvonne Lim, Bernard Tan, Liang Tian and Steven Woon. The lead actress is played by Yvonne Lim.

“We’re really glad to have such a stellar cast on this project,” says director Teo, 33,” without a good script, we wouldn’t have been able to do that.”

Indeed, the story is unique, taking place mostly in 1 location and over a period of 12 hours. It brings the cult independent horror hit, Saw, to mind.

Lim laughs, “Our story is the way it is mostly because of our limited budget. So we have to crank up our creative juices overtime to conceptualise a story that takes place in 1 locale and in 1 day, be as interesting as possible - and yet isn’t a horror film. If it becomes a runaway hit like Saw, that’s definitely great!”

The filmmakers drew their inspirations from their personal life experiences living in HDB flats. Indeed, the location is a block of HDB flats that director Teo grew up in. The block is now up for SERS, a public housing redevelopment scheme to re-locate residents of old housing estates to new ones in the vicinity.

Says Teo, “This is an interesting block of flats. It has quite a colourful group of inhabitants. And it holds many memories for me – fond and otherwise! So I hope to capture the essence of this place and its people, before they’re gone forever.”